By Matt Barlow for the Daily Mail

Tottenham are quietly confident they will avoid another summer of unrest from Harry Kane with Manchester City in full pursuit of Erling Haaland and Manchester United opting against Mauricio Pochettino.

Kane wanted out of Spurs at the end of last season, during which Jose Mourinho was sacked days before they lost in the League Cup final to be eventually replaced by Nuno Espirito Santo having slipped into the third tier Europa Conference League.

The England captain felt let down when chairman Daniel Levy resisted City’s approaches because he thought he had a verbal agreement that he would be allowed to leave, and has shown no interest in extending a contract set to expire in 2024. 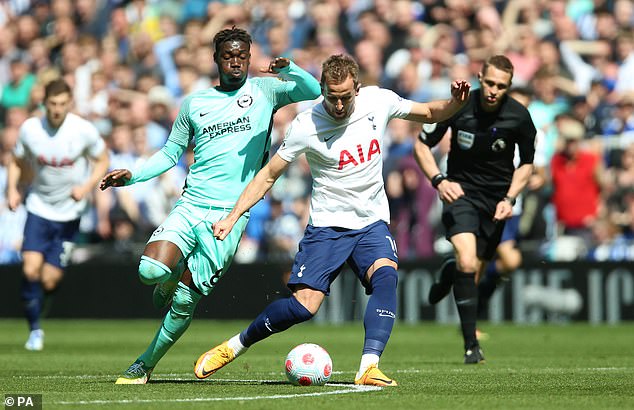 The transfer wrangle dominated the summer transfer window but Tottenham do not anticipate any repeat when the market reopens at the end of the season, particularly if the can finish fourth, securing a return to the Champions League and head coach Antonio Conte commits his future to the North London club.

Manchester City’s search for a centre-forward has turned to Norway international Haaland who, at 21, is seven years younger than Kane and has a £63million release clause in his contract at Borussia Dortmund.

Sportsmail revealed this week that City had agreed personal terms of more than £500,000 a week with Haaland.

Manchester United, who also showed an interest in Kane last year before signing Cristiano Ronaldo on a two-year deal, might have appealed if former Spurs boss Pochettino was on his way to Old Trafford.

Pochettino, currently in charge of Paris Saint-Germain, was Kane’s mentor for more than five years until Levy sacked him in November 2019.

He was on United’s shortlist before they selected Erik ten Hag from Ajax, who will take over from interim Ralf Rangnick at the end of this season.

Without the Pochettino factor, United are unable to guarantee Kane very much more than he can achieve at Tottenham.

They could still finish above Conte’s team and take the fourth Champions League place but appear no closer to winning major trophies, which was the driving force behind last summer’s escape bid.

He would also risk the legacy he has created at the club he supported as a boy and joined from school.

Kane, 28, is within 23 goals of the long-standing Spurs record of 266 set by Jimmy Greaves, and is up to 12 goals in the Premier League this season despite not scoring his first until mid-October.