Russia’s invasion of Ukraine has left the sporting world in uproar with governing bodies banning the country’s athletes and national team from competing.

Russian athletes have condemned the violence, including tennis World No 1 Daniil Medvedev, who said he wanted to promote peace around the world last week.

However, a number of the country’s sporting stars have remained auspiciously silent on the conflict – notably Russia’s footballers.

Only four of the national team play outside of Russia but all have yet to speak out on their homeland’s invasion of Ukraine.

National team captain Artem Dzyuba finally took to Instagram to insist he is against war but stopped short of directly condemning Russia.

Dzyuba’s statement came seven days into the conflict after Russia’s footballers began to face strong calls to break their silence.

West Ham’s Ukrainian star Andriy Yarmolenko called out Russian players for their silence on Vladamir Putin’s invasion of his homeland on Wednesday.

The forward posted a video to Instagram, tagging several Russian players, and urged them to to unite and ‘show their balls in real life’ – referencing Dzyuba’s notorious sex tape. 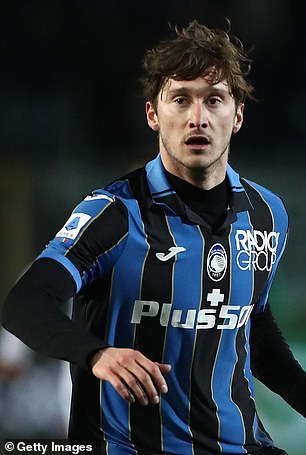 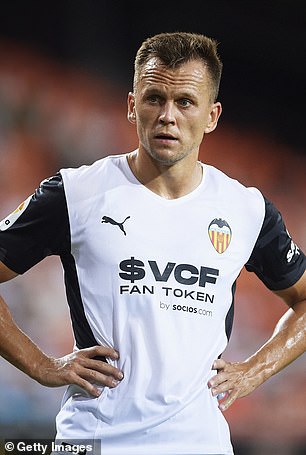 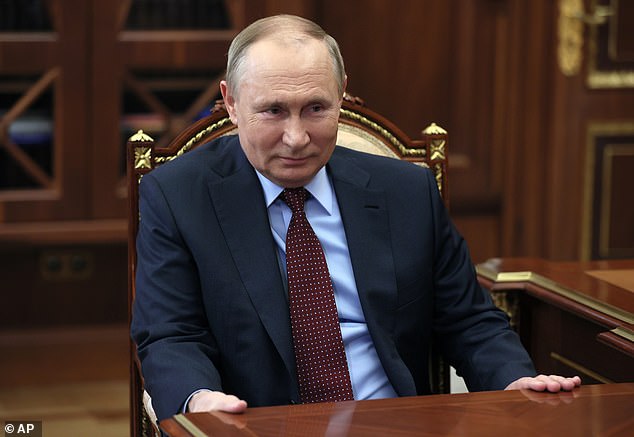 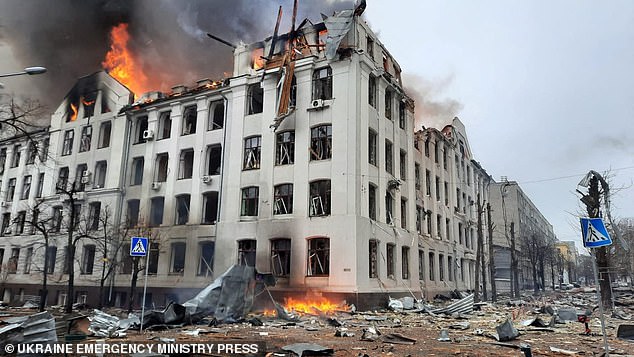 Meanwhile, Everton’s launched a similar scathing attack earlier in the week, slamming Dzyuba and his ‘s***head team-mates’ for not speaking out against Putin’s invasion, claiming they will be ‘locked away in a dungeon for the rest of your life’.

From the Russian squad, Aleksei Miranchuk, who was targeted in Yarmolenko’s criticism, is currently playing for Italian side Atalanta, while Aleksandr Golovin is plying his trade in France.

Denis Cheryshev, who has dual Russian and Spanish citizenship since moving to Spain at age five, is a member of LaLiga side Valencia’s squad but will be a free agent in June. 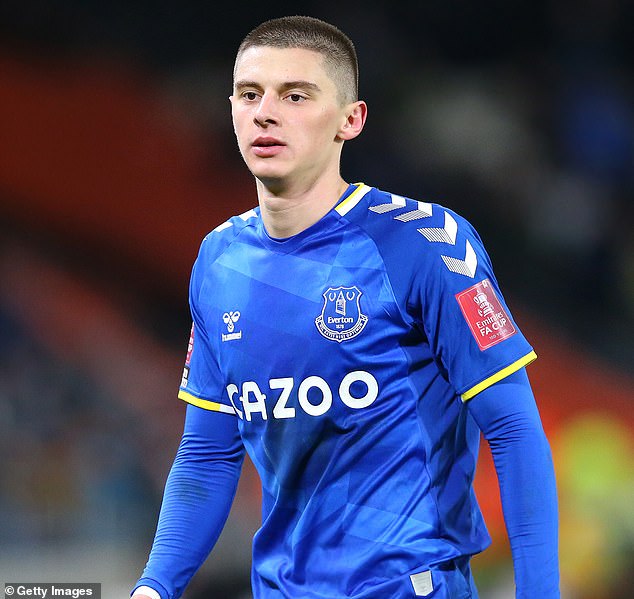 Meanwhile, Fedor Kudryashov joined Turkish side Antalyaspor from Sochi in 2020.

However, none of Russia’s four footballing expats have publicly spoken out from western Europe against the actions of their homeland.

The only direct acknowledgement of the conflict from any of the players has come from Atalanta forward Miranchuk, during his side’s 4-0 win over Sampdoria on Monday.

The 26-year-old refused to celebrate after scoring his side’s fourth goal in the Serie A clash.

Immediately after the goal, Miranchuk held his hands up to signify he wouldn’t celebrate then was quickly surrounded by team-mates. 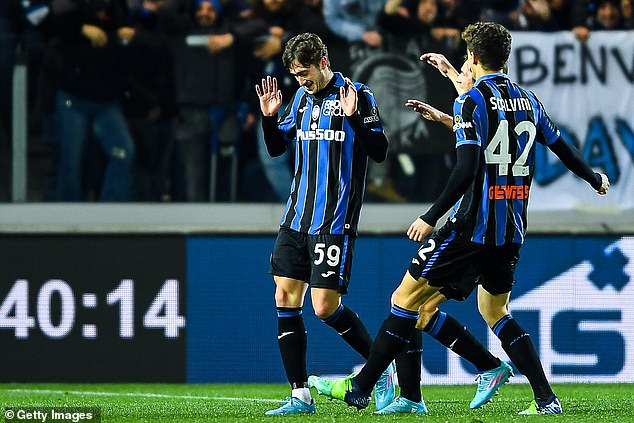 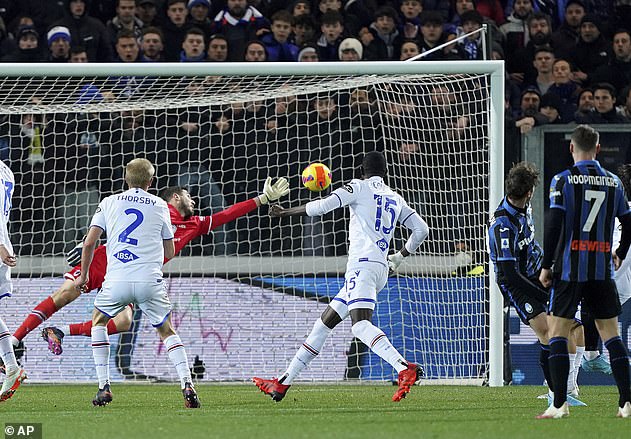 Miranchuk netted his side’s fourth goal against Sampdoria, but his reaction was muted

Miranchuk is friendly with Ukrainian team-mate Ruslan Malinovskyi, who celebrated scoring in the Europa League on Thursday against Olympiacos by lifting his shirt to show a message reading ‘No war in Ukraine’ on his undershirt.

Their team-mate, midfielder Marten de Roon, insisted that ‘there is nothing but friendship’ between the pair and revealed that they talk to each other regularly.

But Miranchuk has failed to publicly support his Atalanta team-mate, who is having a ‘rough time’ with his family and city in trouble, with a statement. 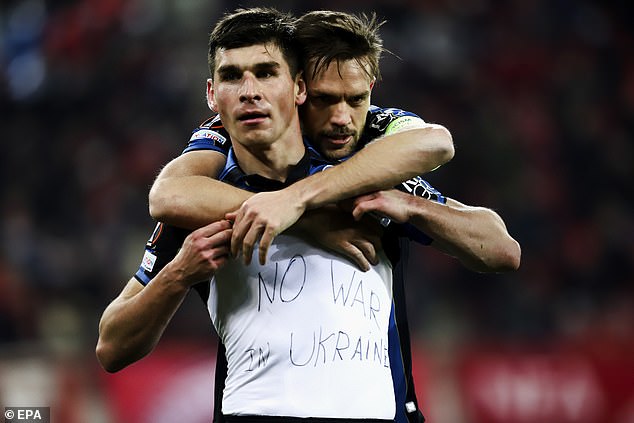 Aleksandr Golovin, who plays for French side Monaco, has not reacted to the invasion well, according to manager Philippe Clement.

Ahead of their French Cup clash on Wednesday, the Monaco boss revealed Golovin would not be ready for the fixture as he has been distracted by the conflict.

‘The invasion of Russia in Ukraine prevents him from concentrating,’ Clement said.

‘He is not well with that, naturally. Nobody likes war. He is focused on getting back to training. These are things he has no control over.’

Despite the 25-year-old’s reported dislike of war, he has yet to publicly speak out on his country’s own war in Ukraine. 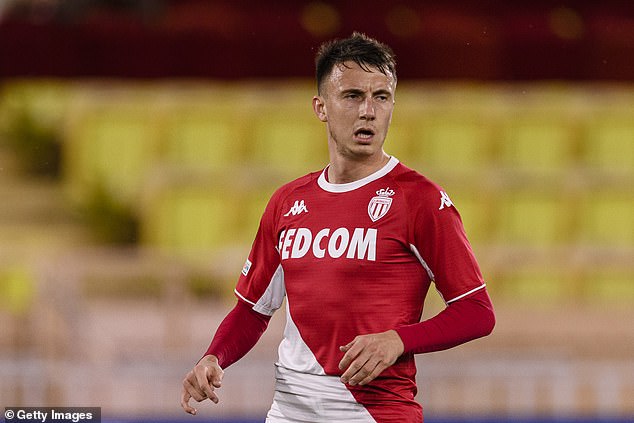 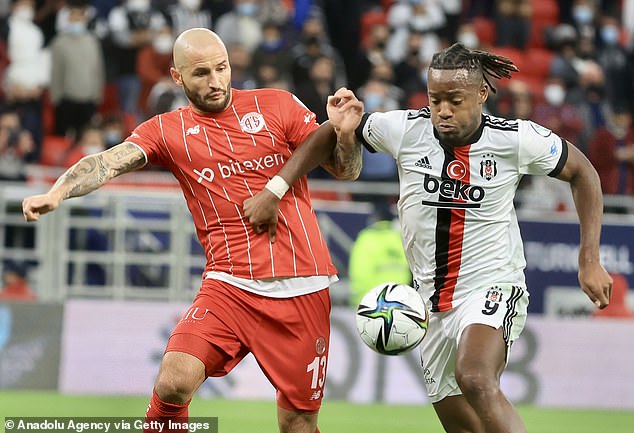 Fedor Kudryashov, who plays for Antalyaspor, has not spoken out on the situation in Ukraine

Neither Cheryshev nor Kudryashov have given any indication on their opinion on the going situation in Ukraine.

Smolov expressed his opposition to the country’s invasion of Ukraine by writing ‘no war’ on Instagram.

Until recently, I did not want to speak on the topic of events in Ukraine. I didn’t want to, not because I’m afraid, but because I’m not an expert in politics, I never got into it and didn’t intend to (unlike a large number of political scientists and virologists who have recently appeared on the Internet).

But like everyone else, I have my own opinion. Since I am being drawn to this topic from all sides, I will express it.

I am against any war. War is scary. But I am also against human aggression and hatred, which every day acquires some transcendent proportions.

I am against discrimination based on nationality. I’m not ashamed that I’m Russian. I am proud to be Russian. And I don’t understand why athletes should suffer now.

I am against double standards. Why one can do everything, but we hang all the dogs.

Why is everyone always shouting about sports outside of politics, but at the first opportunity, when it comes to Russia, this principle is completely forgotten?

How much anger, dirt and bile has now poured out on all Russian people, regardless of their position and profession.

Those thousands of people who write insults and threats – get in line!

It is doubly strange to hear all this from people to whom Russia has given very, very much in their lives.

All this only creates more negativity.The war will end, but human relations will remain. And it will be impossible to rewind. Remember this.

PS: And to some colleagues in the workshop who sit on their ass in mansions in England and say nasty things: it cannot offend us, we understand everything! Peace and goodness to everybody

The 32-year-old, who has earned 45 caps for Russia in his career, posted a black square and wrote the caption: ‘No war’ along with a broken-heart emoji and the Ukraine flag.

Skipper Dzyuba claimed he had not wanted to speak on the situation in Ukraine as he was not a ‘political expert’ but eventually came out insisting that he is against ‘any war’.

However, in the social media post, he continued to say he was against discrimination based on nationality and declared himself a proud Russian patriot.

Following their seven-day silence, pressure is mounting on Russia’s footballing stars to condemn Putin’s attack as the country’s athletes are forced into a sporting exile.

The Russian national team were kicked out of the Qatar World Cup by FIFA, with Poland given a bye to a qualifying play-off final against Sweden or Czech Republic later this month.

FIFA had appeared reluctant to expel Russia from the World Cup given president Gianni Infantino’s close links to Vladimir Putin but on Sunday they made it clear that they would be guided by the IOC — and that the sporting world should be united in response to the invasion of Ukraine.

FIFA’s latest move is just one of many in the sporting world which has seen Russia cast into the sporting wilderness, with their athletes and national teams barred from international competitions with immediate effect.

UEFA also announced a global ban on Russian teams, which rules them out of the women’s Euros in England this summer, when they were due to play group matches against Holland, Switzerland and Sweden and could have faced England in the semi-finals.

Meanwhile in the Europa League, Spartak Moscow were removed with German side RB Leipzig advancing to the quarter-finals as a result.

In Formula One, Russian driver Nikita Mazepin has been barred from racing in the British Grand Prix in July after Motorsport UK’s bombshell decision to ban all racers from Russia and Belarus.

On Tuesday, the FIA had confirmed the Haas driver would be allowed to continue competing in F1 under a neutral FIA flag.

But Motorsport UK took it one step further in ‘solidarity and support to those affected by the conflict’.

The IOC recommended similar bans be introduced by all sports, however athletes have been given the green light to compete at the Winter Paralympics, which begin in Beijing on Friday, as neutrals.

Russian domestic sport and leagues were permitted to continue.