By Chris Wheeler for MailOnline

Ralf Rangnick admits morale in the Manchester United dressing-room is low as they limp towards the end of the season.

Three defeats in the last four games have torpedoed United’s hopes of a top-four finish ahead of Thursday’s clash with Chelsea at Old Trafford.

Interim boss Rangnick now has to lift his players for the remaining fixtures knowing that he won’t be in charge next season and many of the current squad will leave this summer. 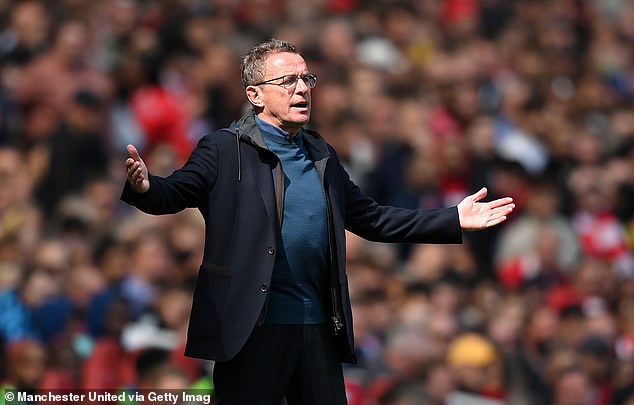 United suffered another demoralising defeat against Arsenal at the weekend 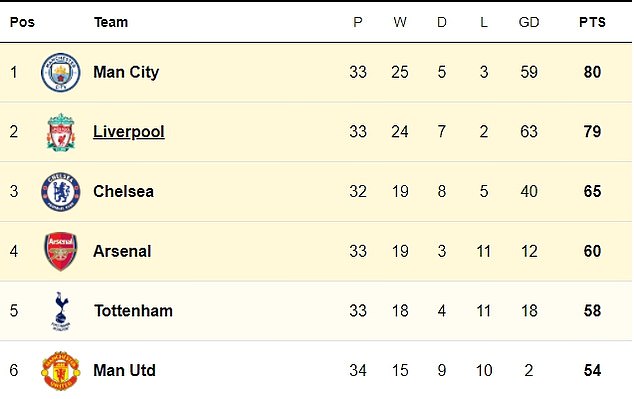 Manchester United find themselves sixth, with six points to make up and four games to play

He urged them to remain professional and earn their salaries as they battle for a Europa League place ahead of new manager Erik ten Hag’s arrival.

‘Obviously, if results are not going well and we lost three of the last four games, the morale and energy in the locker room isn’t as good as it would be,’ said Rangnick.

‘We still we have to perform. This is what we’re getting paid for. It’s important for the players.

‘They know who the new manager will be and they have to show in front of 75,000 fans that they can beat a team like Chelsea. This is our job.

‘This is what everyone has to do and this is what we have been working for.

‘We have four more games to play. The next two games are at home at Old Trafford and obviously we will try to get as many points and win as many games as we possibly can.

‘In order to do that, we need to play on the best level we possibly can. Chelsea is a good team but we know that if we play well it’s possible to win the game tomorrow.

‘I don’t think it makes sense now to still speak and speculate about the Champions League. We need to be realistic. Even if we win all four games, it’s not in our hands.

‘What is in our hands is how we play and our level of performance. It’s important for this season to finish on the best possible note.’