AC Milan fans will be keeping a low profile on Wednesday morning after Inter Milan put on an attacking clinic to book their place in the Coppa Italia final.

It was a chastening evening for Stefano Pioli’s Milan and their supporters as they were ripped apart at the San Siro by their free-flowing city rivals.

Inter, the home team on the night, went into the game with the double jeopardy that a 0-0 first leg left them exposed to losing on away goals should it finish a score draw. But, truth be told, that never looked likely after Lautaro Martinez got the first of his brace four minutes in.

Both of his strikes were of the highest order and the surprise came in that they are his first in this competition this season. 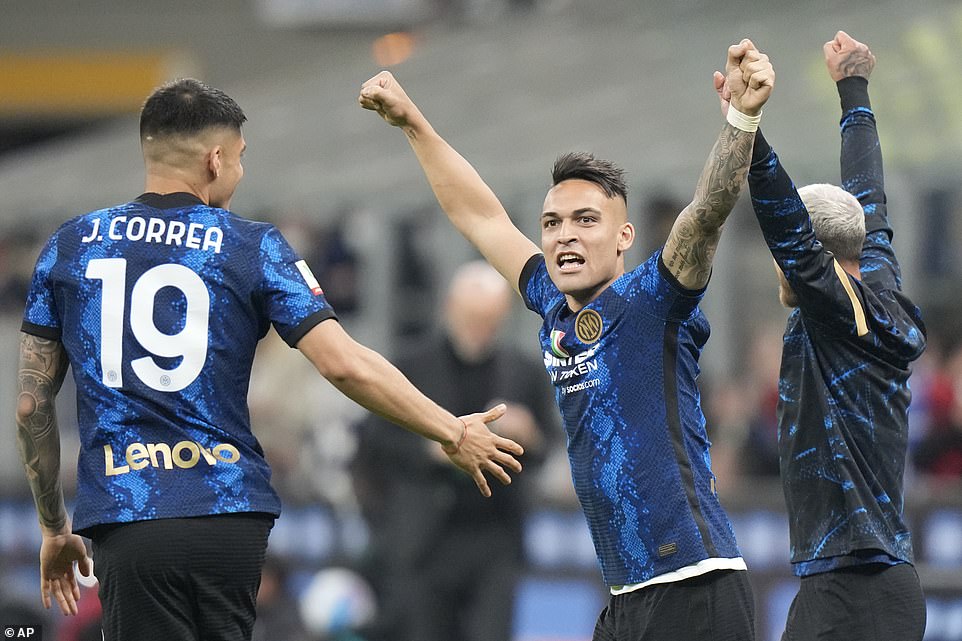 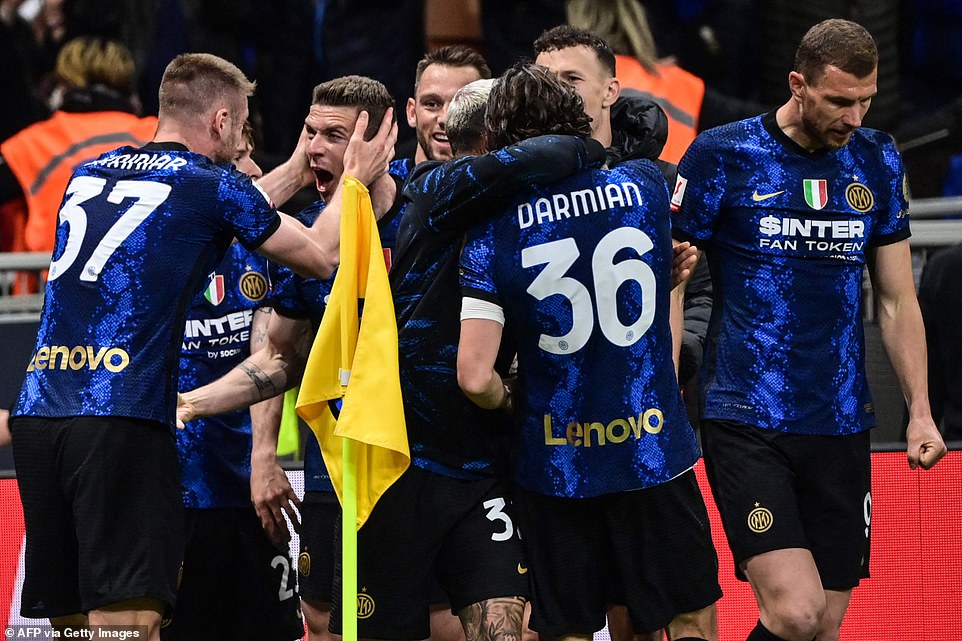 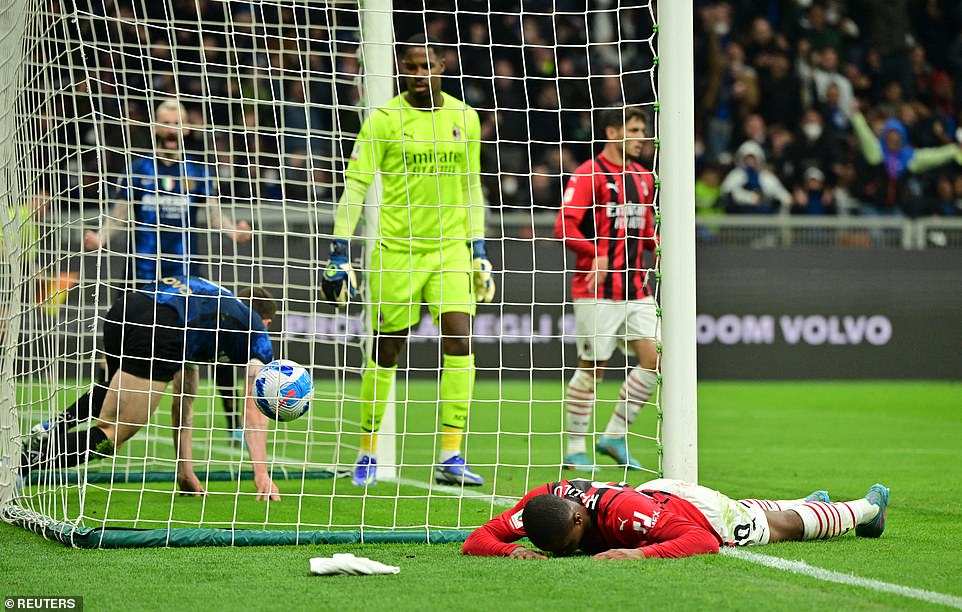 AC Milan looked majorly out of sorts defensively in a defeat that was so comprehensive it was scarring for the Rossonerri” class=”blkBorder img-share” style=”max-width:100%” />

Starting with the first: former Manchester United full-back Matteo Darmian floated out to the right and had the time to fizz a cross back into the area where Martinez caught Fikayo Tomori napping.

Tomori has been magnificent since swapping Chelsea for Italy but this was a display he will quickly need to shake from his system. Martinez beat him by a yard and rifled in on his right-foot first time. Goalkeeper Mike Maignan got something on it but it was in the back of the net before he had comprehended what had happened.

Cue the first of three explosions of noise from the partisan Inter crowd.

Sandro Tonali, Franck Kessie and Ismael Bennacer, who later saw a stunning low drive ruled out by VAR for offside, were simply overrun in the opening half hour. This was a statement of the highest order that goes well beyond a spot in the Coppa Italia final. You have to say it’s advantage Inter in the Scudetto race after this.

‘The lads were fantastic tonight, as we played a derby with intelligence, tactics, striking at the right time. We wanted the Final and to win this derby, as there were three very different meetings before this, but this one was worth a place in the Final,’ Inzaghi told Mediaset.

Asked if he too believes it can cross over to having a key impact in the Scudetto race, he added:  ‘We hope that we can keep this momentum going and we’ve been working for this since July 8.

‘We know the journey we’ve been on, we won the Supercoppa in January, we have a Final in May and also want to end the Serie A season in the best possible way.’

But back to Tonali and how he looked overwhelmed early on; after he was brushed off the ball he was fortunate Joaquin Correa fluffed his lines on the break.

And while he and Milan improved, so did Inter and in the end this was an uncharacteristically poor display from Pioli’s normally well-drilled side.

Goal two for Martinez, and for Inter, was another one to have on repeat for those of a Nerazzuri persuasion.

Tomori and Pierre Kalulu completely lost sight of Martinez – never a good idea – and Correa played the Argentine through. This time Maignan raced from his line, only for the striker to have the wherewithall to just lift it over him to make it 2-0.

Zlatan Ibrahimovic, watching in the stands alongside Milan director Paulo Maldini, must have wondered who those in red and black were, so poor were Milan by their own standards. 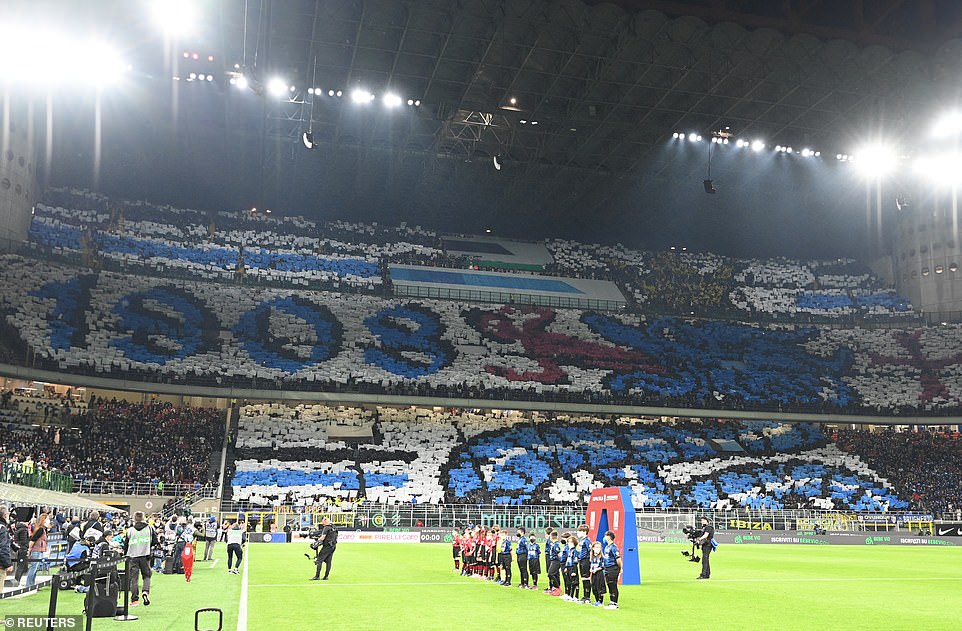 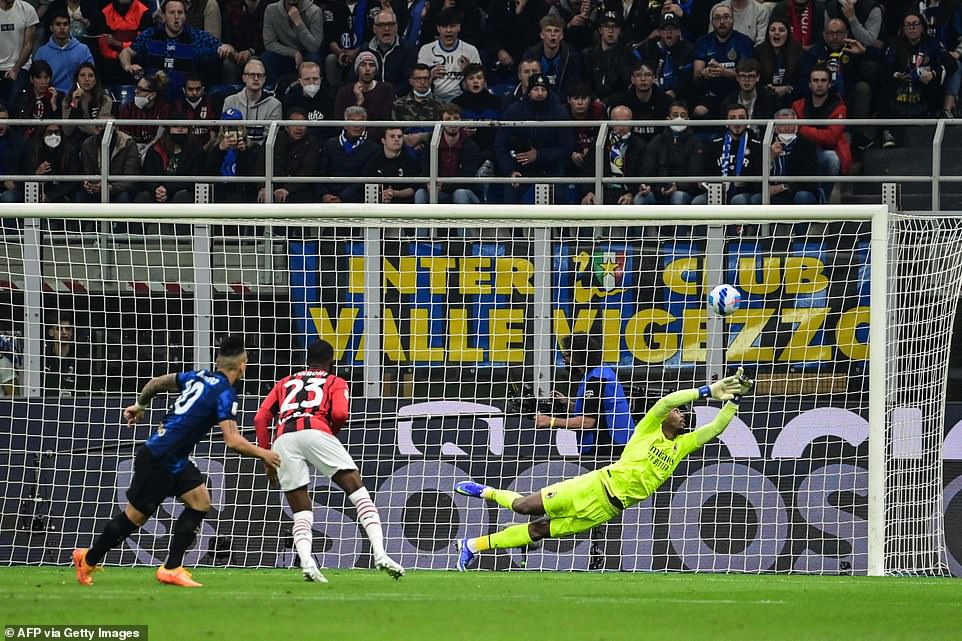 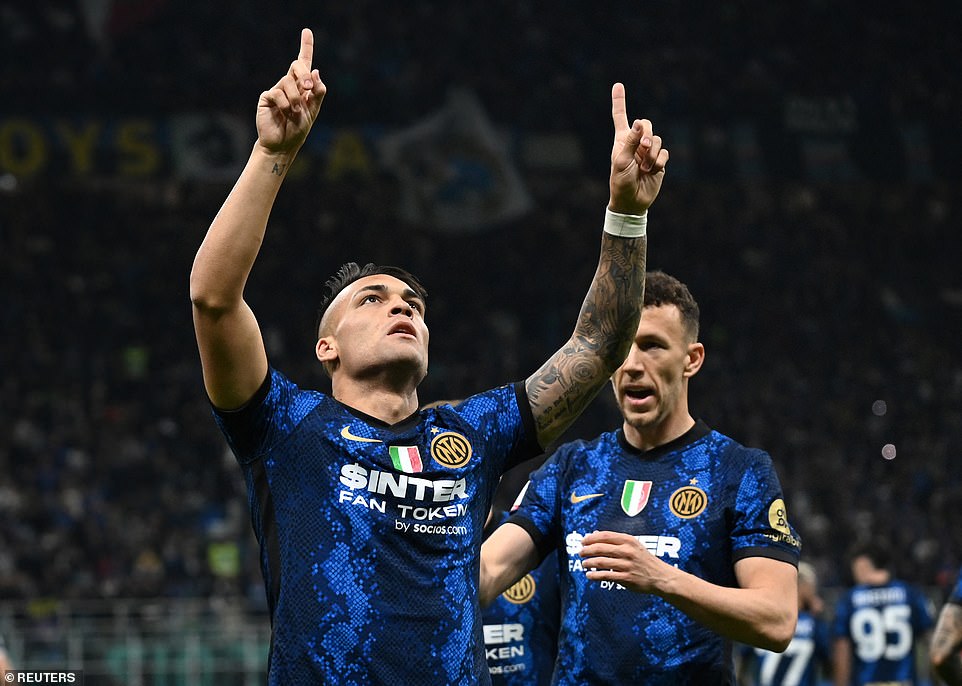 Bennacer looked to have cut the lead in half just after the hour with perhaps the pick of the bunch. Tomori chested a corner back to the edge of the box and it was drilled low and hard past Handanovic, who was unmoved.

In the end it was a mere footnote. Bennacer was hooked moments later and in a substitution of his own, Simone Inzaghi sent on Robin Gosens, a recruit from Atalanta this season.

He had the enviable task of a back-post tap in late on to score his first goal for Inter, capping off an emphatic night for Inter and a truly miserable one for Milan.

‘We wanted to win, we didn’t achieve that, we were certainly up against a strong opponent. I don’t think the performance was worthy of a 3-0, but Inter scored at the right times,’ Pioli told Mediaset.

‘They scored early, we had the chances to get back in, naturally going 2-1 down would’ve created a different match and given us more momentum, so that was a difficult moment.

‘When you concede three goals, it means the opposition played with more quality and we made errors. We didn’t lack for effort, intensity or chances, but it wasn’t our night.

‘We wanted to reach the Final, but this is a great opportunity for the team to prove themselves up to the task and throw everything into the Serie A race, because we have everything it takes to go all the way.’ 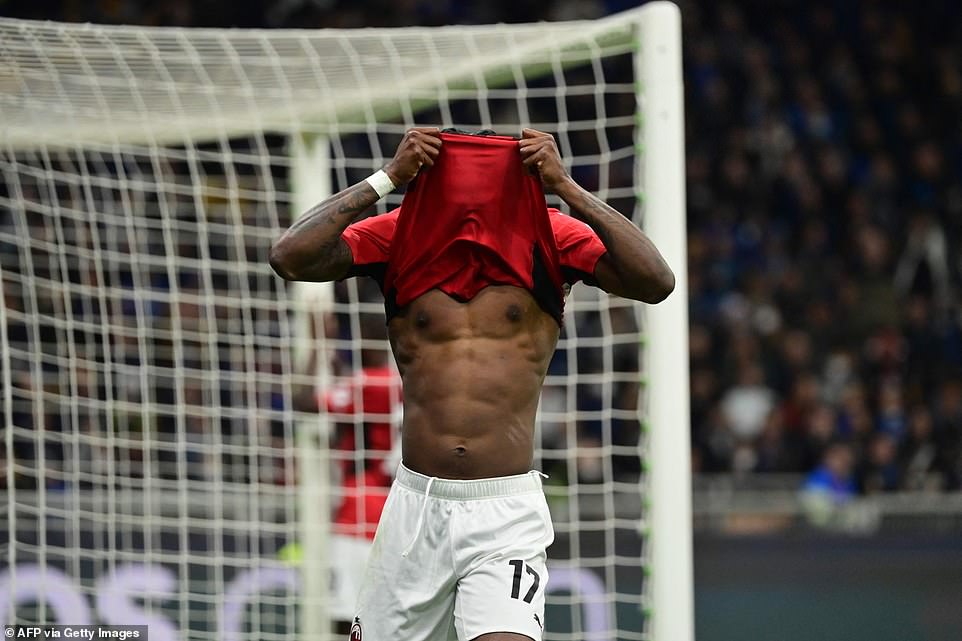 It was a night of frustration for Milan, however, as Rafael Leao buried his head in his shirt having missed a gilt-edged chance 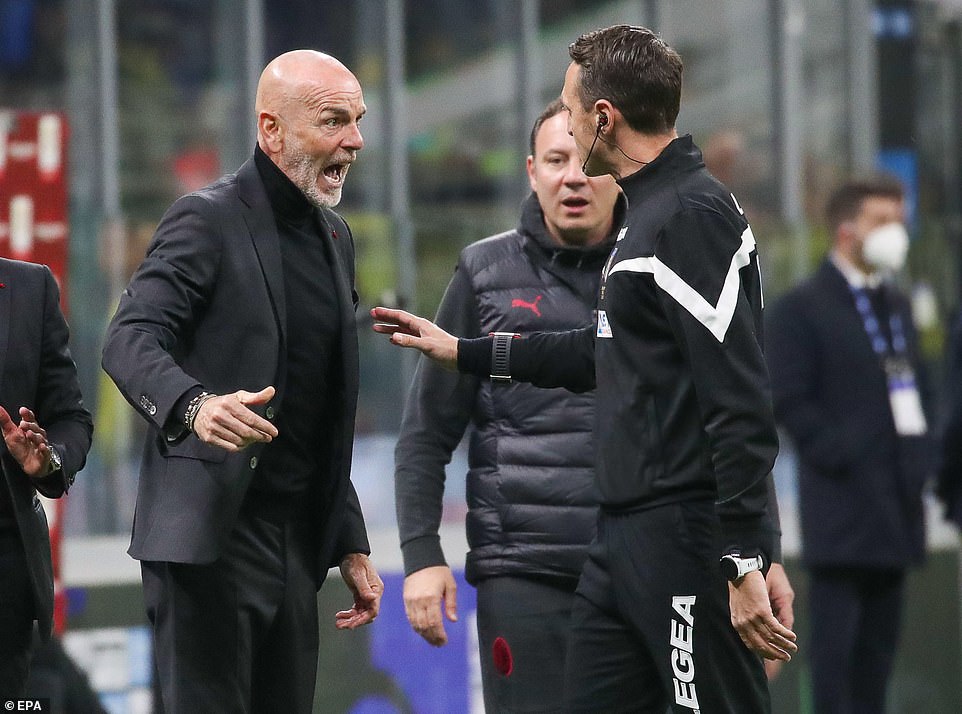